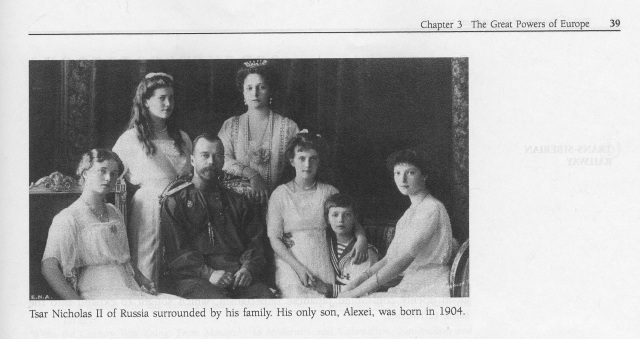 This year I’m teaching two tutorial groups in a first year introductory course: ‘War, Revolution & Society in the 20th Century.’ Our main secondary source is the book Twentieth Century and Beyond: A Brief Global History (2008). In the third chapter, ‘The Great Powers of Europe,’ on p. 39, there is a photograph of the Russian Tsar Nicholas II and his family. As you can see, the second part of the caption reads “His only son, Alexei, was born in 1904.” When I read it, I was wondering why it conveys this piece of information. Since there is no explicit reference (in parentheses) from the verbal text to the photograph, and therefore the reader cannot know the photograph’s specific context or what point it comes to make or support, I had to hypothesize the relation between both kinds of text. Influenced by the caption, I focused on Alexei: Is there anything special here? Or did I miss anything written about the Tsar’s only son? I didn’t remember anything relevant, so I went back to the verbal text and looked for “Alexei,” “son,” “heredity,” and “dynasty,” but found nothing in the entire chapter. So, I searched the index but “Alexei” as well as the other terms weren’t there. What is, therefore, the meaning of the second part of the caption? What do the readers get from knowing that Alexei was the Tsar’s only son, and that he was born in 1904? Since the book doesn’t answer any of these questions, it seems perfectly appropriate to ask: What makes Alexei who, like his sisters, is surrounded by his parents and the other siblings, special? Why is he, except for the Tsar, the only figure who is treated differently in the caption? And lastly, since we discuss the book in a class which consists of students of varied gender indemnities, how does the caption affect the students’ emotions and identification with the history we study? And more generally, how does it position each one of us in relation to memory and commemoration?