Explicit, implicit and indeterminate multiform references (MFRs) maintain pulling and pushing forces between their verbal and visual poles. These forces are the mechanisms that potentially move readers to shift their attention between words and images across a multiform argument (MFA) or message. They are the invisible elements that make MFAs cohesive and coherent; the core of multiform grammar (MFG). These pulling and pushing forces, however, exist due to semantic relationships between, on the one hand, words in the main text, and on the other, words or conventional signs in the captions. In an explicit MFR, for example, “(Fig. 1)” in the main text and “(Fig. 1)” at the beginning of the caption pull and push readers’ attention in the same direction, at the same time. The sign in the main text pushes readers’ attention from the main text towards the caption, and ultimately, the image. The sign in the caption simultaneously pulls readers’ attention from the main text towards itself and the image. Thus, the signs’ identical semantic meaning, as well as their identical appearance, enable readers to effortlessly shift their attention between the MFA’s verbal and the visual components. This is how readers navigate throughout the physical and literal space of the hybrid argument, using the same mechanism. 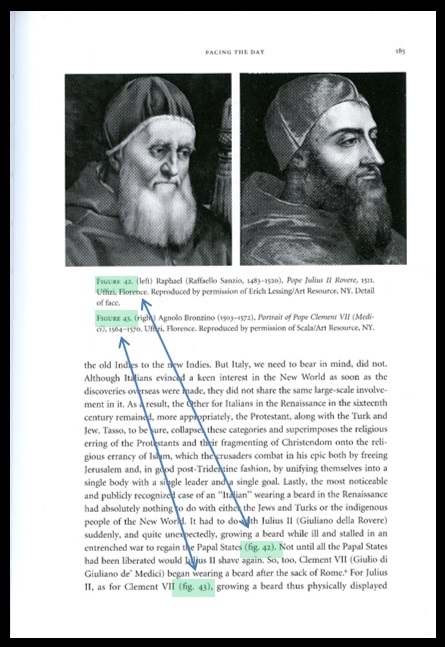 Pulling and pushing forces in explicit MFRs, in Douglas Biow’s On the Importance of Being an Individual in Renaissance Italy. p. 185.

In implicit MFRs, the pulling and pushing forces between the verbal and the visual poles are mostly based on the semantic and the visual similarity between words in the main text and words in the caption, rather than on the convention “(Fig. 1).” It should be noted that when we discuss the verbal and visual poles, as the two ends of an implicit MFR, the visual pole may be specific words in the caption, rather than purely the image. This condition, however, might change as the reading of the MFA continues, and an association between the words in the main text and the image is established. For example, as often happens, titles of portraits are the names of the people who are depicted in them; therefore, when authors discuss the depicted figures in the main text, they inevitably mention the titles of the portraits. In the image below, the titles of the two portraits are written in the captions of the two illustrations, as well as twice in the main text. Thus, “Julius II” and “Clement VII” in the captions, on the one hand, and in the main text, on the other, create poles between which pulling and pushing forces take place. My assumption is that when the two names are mentioned in the main text the second time, the readers find it easier to associate these names directly with the images. However, since in our example one caption is below the other, this association might take longer. At any rate, the semantic and the visual similarity between the names in the main text and the names in the captions, constitute pulling and pushing forces that enable readers to navigate throughout the MFA.

Pulling and pushing forces in implicit MFRs, in Douglas Biow’s On the Importance of Being an Individual in Renaissance Italy. p. 185.

What happens when an MFA uses explicit as well as implicit MFRs? What happens when its space is saturated with varied pulling and pushing forces, between its words and images? A large number of referential conventions, words, as well as images that can serve as verbal or visual poles for MFRs increases the probability that readers will shift their attention between the MFA’s verbal and visual components. These shifts, in turn, strengthen readers’ comprehension and retention of the MFA, since they create associations between the representational level of the MFA and the phenomenon it discusses. I would like to argue that each MFA has an ideal number of MFRs to reach its ultimate comprehension and retention among its readers. Grasping this number is to use MFG effectively and creatively since, at the end of the day, MFRs are rhetorical devices. 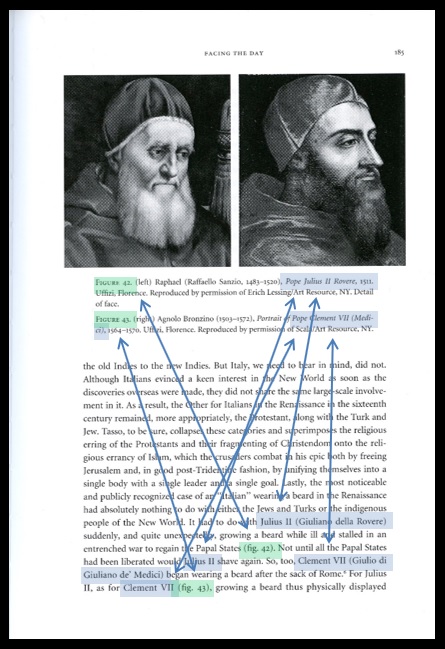 Pulling and pushing forces in explicit and implicit MFRs, in Douglas Biow’s On the Importance of Being an Individual in Renaissance Italy. p. 185.